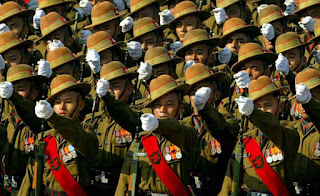 The progeny of the Himalayan nation, the Gorkha, has been acting as sentinel of India since centuries. The name has been trailed from the Medieval Hindu Warrior Saint Guru Gorakhnath. The name Gorkha has originated from the Hill town of Gorkha from which the Nepalese kingdom expanded.


The Indian Army sustains seven Gorkha regiments composed entirely of Gorkhas, who are recruited majorly from Nepal and it’s the most revered regiment of the Army. Post independence, India successfully retained regiments 1, 3, 4, 5, 8, and 9 GR whereas 2, 6, 7, and 10th GR joined the Brigade of Gorkhas in the British Army. 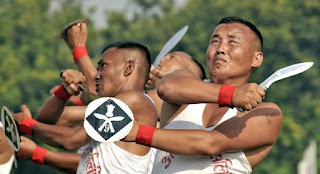 Both nations bestow the Honorary rank of General on each other’s Army chiefs in their respective nations. The biggest military setup of the Indian Embassy is in Kathmandu. Gorkhas were incorporated into the Indian forces in 1815 and on April 24, 2015 they completed 200 years of soldiering. The Gorkha’s valour in Anglo-Nepal war startled the British, which subsequently prompted them to integrate the Gorkhas into the British army. Initially the Gorkhas


were referred as the Nasiri Regiment; later it got christened as 1st King George’s Own Gorkha Rifles. The Regimental insignia of the entire Gorkha Rifles consists of a pair of crossed Khukris, which is their signature weapon and symbol of gallantry. Their resounding war cry ‘Joi Maa Kali Aayo Gorkha’ had been reverberating in the battlefield since centuries. This literally translates into “Hail Goddess Kali, the  Gorkhas are here”. 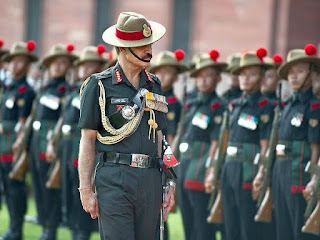 The Gorkhas are the one of the most dreaded soldiers in the world. As the former Field Marshal Manekshaw had exclaimed “if a man says he is not afraid of dying he is either lying or is a Gorkha”. The display of valour flaunted by Gorkhas during the 1962 Operations was exemplary, especially at Leh and Namka Chu. Again, during the 1965 War, the Gorkhas fought concertedly with their comrades where they blew Pakistani Raiders in Kashmir, as well as in the Punjab. The rendition of the Gorkha regiments during the 1971 War, in Operation PAWAN, on UN Missions and in counter insurgency Operations in J&K and the north-east, has been superlative.